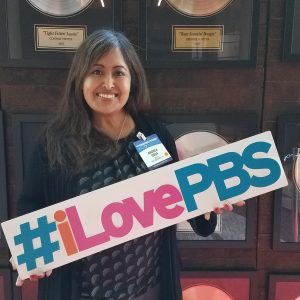 BaBette Davidson, President and CEO of The Programming Service for Public Television, announced that Andrea Sosa has joined the organization as a Program Director.

Davidson said, “We are beyond thrilled to have Andrea join our team. Andrea is a wonderful programmer and person!  She has accomplished so much during her time at KLRN and has really made a difference in the PBS system. She is the perfect addition to our team and we look forward to all that she will accomplish for our station partners.” In reference to her new position, Sosa said, “After 18 years in Public Broadcasting with KLRN in San Antonio, I am delighted to embark on a new journey with The Programming Service for Pubic Television, where I will continue to develop program schedules for KLRN, as well as other stations across the country. I look forward to joining this exceptional team of dedicated programming professionals and continue to serve our local communities.”

Sosa began working with KLRN Public Television in 2003. She originally joined KLRN as a Programming Assistant and in 2018 was promoted to Director of Program Content. Andrea was Vice President of the PTPA Board in 2016 and the President of the PTPA board in 2017. In 2019, Sosa was named the PTPA Programmer of the Year and will remain on the board until 2022. Sosa has also been involved in PBS Advisory Councils, was a Wyncote Fellow in 2018, and has earned certificates in General Nonprofit Management, Fundraising, and Leadership Development.

Founded in 1996, The Programming Service for Public Television is based in Tampa and currently serves 49 PBS client stations across the country. The company provides strategic program scheduling customized for each market across all platforms, consults on station program-purchase decisions and guides in crafting on-air fundraising schedules in markets including LA, Seattle, Detroit, Orlando, Milwaukee, Iowa, and Denver among others.

WILL joins The Programming Service for Public Television

The Programming Service is delighted to announce that Illinois Public Media (WILL), on the campus of the University of Illinois and serving the East Central Illinois area, has joined our programming family.

WILL has a century of history behind it. WILL’s radio station began broadcasting in the 1920s and WILL-TV began broadcasting in 1955. Since then, WILL has been dedicated to educating its community and viewers through public media. Illinois Public Media is committed to entertaining, inspiring, and empowering its audience with the best of public television, which is a mission that The Programming Service for Public Television shares. President and CEO of The Programming Service, BaBette Davidson, said, “We are so happy to work with the WILL-TV team and for the trust that they are showing in us in this new partnership. Their passion for public television matches our own and we are eager to assist them in serving their community.” Lillie Duncanson, Director of Broadcast Operations at WILL, said, “This partnership will not only grow our audience but will bring efficiencies to the organization, allowing us to focus on the local services that make Illinois Public Media an essential part of East Central Illinois.”

The Programming Service is proud to announce that we are celebrating our 25th anniversary! Thank you to our family of stations and our wonderful partners who have made this possible. We are grateful to be part of the positive impact that public television has made over the last 25 years.

KAMU and WTCI joins The Programming Service for Public Television

The Programming Service is pleased to announce that KAMU in College Station, Texas and WTCI in Chattanooga, Tennessee have recently joined our programming family.

Universal educational opportunity has been KAMU’s mission for over 50 years. The Programming Service hopes to continue to build on the educational legacy that KAMU has been constructing for decades by offering premier programming and services that will continue to enrich and engage the community. BaBette Davidson, President and CEO of The Programming Service said, “We are so excited to work with Doug Walker and his excellent team at KAMU. We are extremely grateful to work with such a strong group of Texas stations.”

WTCI similarly has been enriching their community for over 50 years. WTCI aims to be a “center of exploration for all ages”. The Programming Service is excited to partner with WTCI in order to assist them with their mission of “empowering people to discover their world” and to continue to be a prominent community resource. Davidson said, “We are so thrilled to once again be working with our good friend, Bob Culkeen, and his outstanding staff at WTCI.”